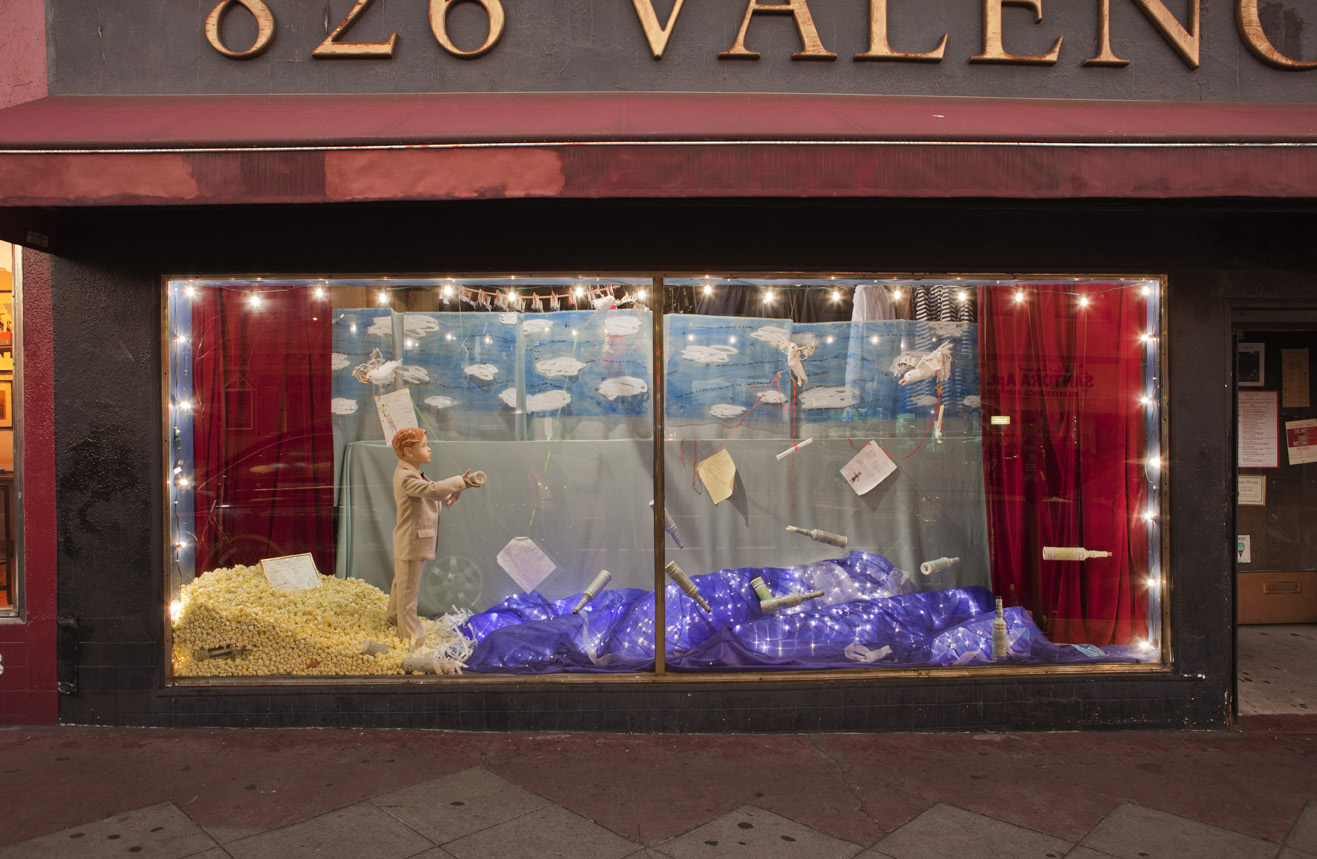 Window display at 826 Valencia's pirate store (Photos 1, 5, 6, 7 by Weber Shih)
Kids 826 Valencia get their letters ready for delivery
A Bethany resident writes to her penpal
Letter, complete!
Window detail: A seagull delivers an 826 Valencia letter
Window detail: Bottle buried in a mound of sand made of crumpled balls of paper
Window detail: A bottle floats through a sea of lights and gauzy blue fabric
Treasure hunt: The "IS" bottle hidden in the Dearborn Community Garden
Creating the bottles from porcelain clay using a plaster mold

What: A multi-faceted message-in-a-bottle-themed project involving a window display, a penpal exchange, and a treasure hunt

Roles:
Built and held creative vision for all aspects of the project
Coordinated penpal exchange between multi-lingual/cultural kids and adults culminating in an ice cream social
Coordinated a treasure hunt with five organizations in the Mission and treasure-hunt participants

The Story: Over the years I’ve worked with kids at 826 Valencia, a writing and tutoring center, giving workshops on topics such as writing Madlibs and scientific fairy tales. When the opportunity arose to do a window display for the pirate supply store that fronts 826 Valencia, I jumped at the chance.

Inspired by a book on ocean currents I was reading, I decided the theme should be “message in a bottle”. The project began as a solo adventure where I crafted ceramic bottles and worked on the overall design. When I thought about the actual messages for the bottles, however, I wanted them to connect to viewers and feel authentic. This would be the crux, the narrative of the window. It wasn’t long before I decided to enlist 826 Valencia’s many aspiring writers, to pen the messages for the bottles.

At the time I was also an artist in residence at Bethany Senior Center. When I told the residents at Bethany about the project, they were excited to be the potential recipients for the letters. With that, I started a penpal exchange between these two groups, very different in age, but sharing a lot of commonalities, like being first and second generation immigrants to the US and living in the same neighborhood. In all, roughly sixty kids and almost as many residents at Bethany were involved. Unlike many message-in-a-bottle exchanges, where the writer waits years, even a lifetime for a reply, this one culminated in an ice cream social after two rounds of letters were sent back and forth. New friendships were formed and with their approval and delight, many letters from the project were displayed as part of the message-in-a-bottle window.

As another piece of the project, I created a treasure hunt. Afterall, what is a message-in-a-bottle project without the joy of finding an actual bottle? Rather than being washed ashore, however, these bottles, five total, were hidden around the neighborhood at some of my favorite places, like the Community Music Center, and the Dearborn Community Garden. Clue sheets were available at 826 Valencia and families could sleuth around the Mission, looking for bottles. The bottles spelled out a message, a quote from one of my favorite artists: “Art is for Everyone – Ruth Asawa”. Participants who unraveled the message were put into a drawing to win the bottles as well as a membership to the Exploratorium.

Slide presentation given to kids at 826 Valencia to get them excited about the project.